Looking around my room, attempting to create a mental packing list, my eyes fell onto my collection of elephant figurines. I think, possibly more so than any other animal, elephants inspire wonder and curiosity. At zoos and safari parks, the elephants are always among the most popular with visitors. Just recently I was chatting to a friend about my own interest in these incredible animals, as evidenced from an early age...

When I travel, I really enjoy finding new and different figurines to add to my collection. Those here in Rome were all found on my last visit to India, a fact that has made me even more excited to get back to Chennai to start the hunt for new ones. But what is the significance of the elephant within Indian culture? 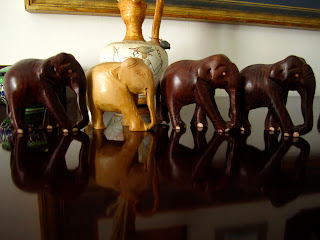 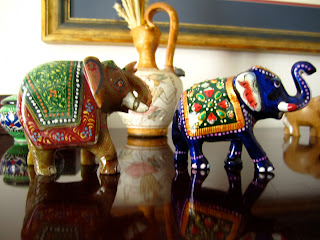 After some quick research, the elephant appears as a symbol of power, dignity, intelligence and peace in China, India and Africa. Within Asia, elephants also symbolize wisdom, loyalty, strength, fidelity and longevity. Interestingly, despite the increasing number of negative interactions between humans and elephants (as their natural habitats shrink), these animals maintain a purely positive significance. In fact, figurines are often considered to be good luck charms as they ward off evil spirits through the wisdom and power associated with the animal. 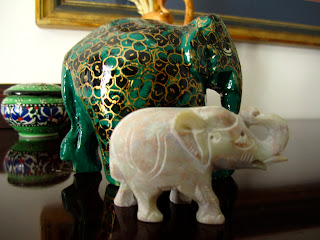 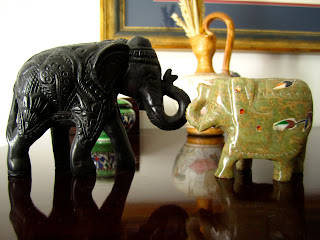 Perhaps the most famous symbol of the elephant in India is the god Ganesha (also written as Ganesh, Ganapati, or ), the "remover of obstacles" or the Lord of Beginnings. As one of the most popular and recognizable deities in the Hindu pantheon, he is believed to be the patron saint of arts and sciences, intellect and wisdom. In addition, he is credited with bringing joy and happiness to the family, as well as being the destroyer of vanity, selfishness and pride.


According to mythology, Ganesha was created by the goddess Parvati to guard her bathroom while she bathed. However, when her husband, Shiva, returned to find a stranger, he sliced off his head in anger. In order to repair his mistake, Shiva ordered his troops to find any sleeping being who was facing north. When they returned with the head of a young elephant, Shiva attached it to the boy in order to revive him. Ganesha then became one of the five main Hindu deities, joining Shiva, Vishnu, Durga and Brahma.


Along with his elephant head, Ganesha is most often portrayed as having four arms, each holding an object of significance: a goad to move people along their path in life, a noose to remove obstacles and difficulties in their way, a broken tusk as a symbol of sacrifice, and a rosary to demonstrate the continuous pursuit of knowledge. His head represents the atman, or soul, which symbolizes his connection to humanity while his body signifies maya, the earthly reality for humans. Finally, with his trunk he holds a laddoo, which is a type of Indian sweet and is symbolic of the need to search for sweetness in life.


In eighth grade at St. James Catholic School in Falls Church, Virginia, I was asked to choose a confirmation saint. I chose Elizabeth Anne Seton. However, if I could go back, I think I'd choose Ganesha instead.
Posted by Caitie at 09:40