On our fourth day in Sri Lanka, Samia and I were lucky enough to see... Elephants! I confess, I was significantly more excited about this than Samia as I've never seen an elephant up close outside of a zoo. The drive took about 2 hours but was worth it with pretty palm trees and nice weather. This would of course change (monsoon season!) but still couldn't put a damper on my excitement. We were very kindly accompanied by Samia's friend Dylan who was amazingly patient while I bounded all over trying to take as many photos as I possibly could. Thanks as well to Samia for her equal amounts of patience!

Our destination was the Elephant Orphanage, where elephants are brought in if they have been injured or abandoned by their mothers. On the surface, it's a really nice place as they have food and space to wander around in safety. However, while I was over the moon to be interacting with them so closely, I did feel there were some negative aspects to their existence there. 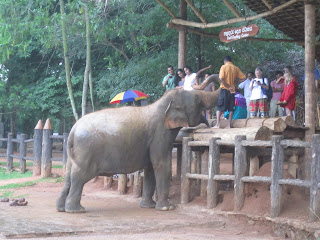 First up, after paying the entry fee (which was ridiculously lopsided: 100 for Sri Lankans, 2000 for foreigners), we wandered over to where one of the elephants was being fed by tourists. You had to pay a small fee for the basket of fruit but I thought, when am I going to get a chance to do this next? Although I know elephants are hardly man eaters and I was high enough up to not have to worry about being trampled... I have to confess, it's still a bit frightening to be putting your hands anywhere near such a big animal's mouth! Also, I discovered elephants have very strange tongues. Ew.


After I finished my fruit basket and said bye to the big elephant, we wandered over to the nursery area where baby elephants were being fed with bottles of milk. They were so sweet and obviously really excited to have their lunches. But... I noticed they were chained to the floor by one of their back feet. This made me sad, even though it's obviously a safety precaution. The feeding area is set up with open sides so that tourists can stand all around it so if an elephant was to decide it didn't want any more milk and wanted to leave, someone could be seriously hurt. Still... I couldn't quite get to terms with it. I really felt that the elephant's safety and comfort should come before that of the tourists who are there by choice. This feeling was solidified later one. 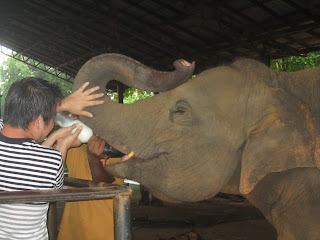 The final area of the park has elephants out and about, roaming freely around the property in big herds. I counted at least 25 elephants at one time and those were only the ones I could see. As we left, there was another huge herd of about 10 elephants being driven in by the handlers so who knows how many are actually around the property.


It was while watching these huge animals roaming around that my negative feeling started to solidify. For example, in the picture below, it seems that the elephants are free to move around as they wish. However, what you can't see is that the elephant in the foreground is actually chained there. I think this is done so that the herd will stay close to where the tourists can see them - which is of course, absolutely not ok. I don't know, maybe there is a better reason for it but since only a few elephants were chained like that, I couldn't work out what an alternative cause would be. I would have preferred to pay more and been in jeeps or something, looking for them rather than having them kept close to the pedestrian areas. That said, it is a beautiful location and the elephants did seem pretty content to stay in this area so maybe it's not as bad as I assumed. 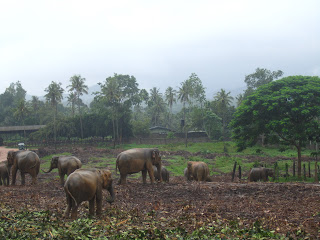 There were a lot of good moments too and I don't want it to seem like the experience was wholly negative. Aside from those sorts of niggling thoughts, I had a great time and really enjoyed being able to see such beautiful animals. Although it was raining while we were there, I am still really glad we went. I even made a new friend who was very interested in having her picture taken. 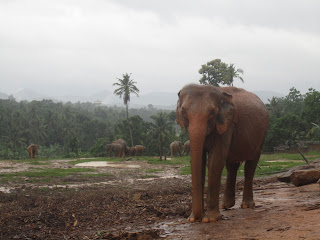 After seeing all the different areas of the park (which doesn't take very long as it's fairly small), we started the drive back to Colombo. Along the way, we stopped to pick up some of these very strange fruits from one of the roadside stands. The smaller pink fruit sort of looked like the chestnuts trees you find in Italy (although those are bright green). Called Rambutan, it has essentially a soft interior that looks like a marble. It's sort of squishy although the consistency is I guess closest to a grape. Tastes kind of like a grape too now that I think about it. You peel back the pink outside and then can pop the soft center out. Surprisingly tasty!


The second fruit we picked up was called Mangosteen and looks sort of like a plum although the outside is a hard shell that you peel back to get to the soft inner fruit. The fruit inside is divided into segments, kind of like an orange, but the taste seemed to have a vague similarity to a banana. Yes, the fruit itself is basically as strange as my description just was. But, still tasty!

I had to split this post into two because the two activities we enjoyed were pretty different so I'll post the second half as soon as I finish writing it up... I hope it will be worth the wait!
Posted by Caitie at 01:08