After visiting the elephant orphanage, We began the drive back to Colombo. With a quick stop for lunch at a roadside cafe, we made it back to the city in time to visit a local astrologer who our hosts have been seeing for years. When we arrived at his office, I was surprised by how busy it was with two other groups waiting to see him. The first was a mother and daughter, who looked to be about my age, and the second was a couple who seemed to be in their thirties. One by one, the couples shuffled into and out of his office until it was finally our turn. By this time, Sumitha-aunty (our host) and Anuki (Dylan's sister) had joined us and we all settled into his office. 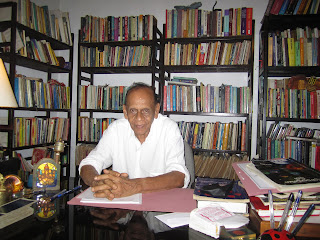 Surrounded by books on a wide range of topics, such as medical texts and those charting the course of different stars, he looked much more professional and legitimate than I had anticipated. I guess I was expecting to be shown into a back alley room where an old crone was hunched over a crystal ball. Given that assumption, I think it's safe to say that I'm uncertain of my thoughts on astrology. I read my horoscope whenever I get a magazine but, I often feel like I only take it to heart if it says something I agree with or want. For example, "This month will give you an opportunity to improve your finances" - yes please, oh astrology, you're so legitimate! "This month you will be rude to people and they will not like you' - umm, no. Oh astrology, you're such nonsense. Etc, etc.

However, sitting with him, I realized that when he said things I automatically agreed with, then I just moved on from them quickly. When he said things that I hadn't considered or that I disagreed with, that made me stop and consider those points a lot more fully. This made me wonder if the greatest benefit of an astrologer is not necessarily to correctly see into your future or past, but rather to make you look into them yourself and actively think about the different elements of your personality and lifestyle.

I recorded the session so that I could share it as fully as possible and having listened to it again, here are the main points he shared with me:

Apparently, the number 25 is a very powerful and strong number, and those who are born on the 25th day of the month will be given those qualities. I'm not sure how powerful or strong I am though. Definitely not in a physical sense but I guess this experience of moving to India on my own and undertaking this research has shown me that maybe I'm at least a bit braver than I thought I was. So maybe that's how the number's qualities are showing themselves?

2) My character is essentially divided between academic and dreamer.

This was one of the things that surprised me because I hadn't thought of things in those terms before. He's essentially right since I have chosen to pursue academic studies for most of my adult lift. But he's also correct in that I'm more of a dreamer than I think even I realized. He asked if I tend to day dream a lot and I was startled because I do tend to day dream when I'm riding in the auto rickshaws or waiting for a meeting. But, I would argue that everyone does that so I'm not sure if it's necessarily a characteristic specific to me. However, maybe that's the point: we're all dreamers who have to put that aside in order to go about our careers or other life activities.

Apparently, I have a stressful character and therefore I need a hobby to serve as an outlet for that stress. I'm not sure how I feel about this assessment. On the one hand, I think I'm actually a lot more laid back in certain situations than other people would be in my position. For example, when writing papers or studying for exams in university, I was always more matter of fact than emotional about them. My attitude was "I have a week to study for this, that's all the time I have, so I should use it properly rather than wasting time stressing about the exam". And, I would argue, this attitude has served me well so far!

On the other hand, I do tend to get anxious about really random things that don't make sense at all. For example, when travelling, I like to have everything ready in the right order so that the trip goes as smoothly as possible. This means that all the bags are packed correctly, passport and ticket are easily accessible, and I know where I have to go when I reach the airport. On the surface, this seems completely normal as all travellers want to avoid unnecessary stress. But, if one of those elements goes wrong, even in the simplest ways, it makes me really anxious and I have a hard time letting go of that feeling for the rest of the day. So, this makes me think he might be on to something. I had already asked my mom to bring my flute back to Rome with her because being around Nipsi (who plays the flute in her band) has inspired me to give it another go. I'm hoping that having it around will help me to deal with any frustrations and anxiety I come across as I write up my thesis this year.

4) I have uncanny judgement about people and things.

I actually would agree with this statement, although I doubt there are many people in the world who would see this as a bad thing and want to deny it! I do think that my intuition is pretty good and I've tried to make a point in recent years to listen to it. This often happens with items that I find out later were more important than I originally thought. For example, when leaving the house in London, sometimes I'll see something as I go (such as my umbrella) and even though the sky is bright blue, I'll think "I should take that". I've found when I have that feeling and ignore it, I regret it (soaked from a sudden rainstorm). This is just a simple example and yes, the idea that it could rain any day in London is probably not particularly brilliant, but I hope you get what I mean. So, I'm going to strive to listen more to my intuition and trust my own judgement on things this year.

5) I have incredible luck.

His exact words were: "You have unbelievable, incredible luck. If we were all travelling in a car and the car turned over, you would be the one to walk away without a scratch." While I'm not sure that would be the case in reality, I do think I've had some pretty close calls with injuries that could have been a lot worse. For example, I once fell backwards down the stairs on one of London's double decker buses. Slamming into the bar at the bottom, I was shocked to find that I barely had a bruise after all that. But, upon further consideration, I realized that if I had been slightly lower and hit my neck on that bar... well, things would have been much, much worse. I'm sure everyone has moments in their lives when they get a sudden appreciation for their body and how different their lives would be if something were to change so drastically and that was definitely a moment like that for me. So, I'm not sure how uniquely lucky I am but here's hoping that luck continues!

Overall, it was a nice experience and really interesting to watch him draw up a quick star chart for me and read my palms. And while some of his comments were surprisingly accurate, I do think a lot of those thoughts could apply to anyone. However, I do appreciate the introspection this experience sparked. I think this whole adventure of coming here to India on my own, following my research and navigating through the struggles and obstacles that come with the territory has really made me take a step back and think about myself, my future and what I really want out of life. Not sure if I have a better grasp on that now than I did before I came but at least I hope I'm more aware of all the different elements that make up my slightly strange existence.
Posted by Caitie at 23:42