Review: "Get Stuffed" at Rhapsody


On Tuesday, Nipsi and I stopped by the Courtyard Marriott here in Chennai to try out their new promotion, "Get Stuffed". Because of Nipsi's TV show, "Enter the Kitchen", she often has these sort of events where she first goes for a meal at a restaurant, selects which dishes to demonstrate on the show with the chef, and then comes back at a later date with her camera crew. I had been with her previously to a Lebanese restaurant, Yalla Yalla, at the Radisson (I'll post a blog about that soon) so it was nice to have something to compare it to.

Upon arriving at the hotel, we were chagrined to find out that the restaurant where the promotion is taking place, Rhapsody, is actually closed during the day. We had made an appointment with the hotel's PR woman and so when she arrived to greet us, she explained that they were opening the restaurant just for us. I was pretty impressed but still slightly embarrassed by the fuss. It ended up being really nice though because we were able to chat to the head chef, Dev, about each dish since he wasn't rushing around dealing with other tables.

In Chennai, it is notoriously difficult to get wine, even for hotels or restaurants. For some reason, the state of Tamil Nadu has decided to make importing wine extremely hard and therefore orders often take ages to fill and businesses are left waiting for their stock. We were therefore surprised to see so many foreign wines (Italian, Australian and French mainly) on the wine list at Rhapsody... although we were less surprised to find that only one was available by the glass. So, we ended up with the Le Vele, Vecchio, Moraco 2009. I found it a bit sharper than I prefer but this was possibly because the first glass wasn't chilled enough. When we asked them to put the bottle in an ice bucket, we both agreed the taste improved. But, I'm not much of a wine expert so who knows! The one thing that takes some getting used to here is having your water bottle presented to you as if it was a fine wine. I understand why they do this (so that you can check the seal and be assured that it isn't tap water masquerading as Evian) but it still makes me laugh... "Madam, your water... is this to your liking?" accompanied with a flourish.

The first course was marscarpone cream mixed with chives before being wrapped in smoked salmon thinly sliced and served with a green salad of olives and pine nuts. I'm not usually a huge fan of smoked salmon (or salmon in general, although I'm trying to be more adventurous with it) but this was delicious. However, I found I was really distracted by the thought of how similar it tasted to Philadelphia brand salmon cream cheese... basically, this was a very classy version of it and, regardless, it was tasty. I also decided to be brave and eat the salad despite my mother's constant warnings about lettuce. I was just so desperate for some leafy greens! I haven't had any lettuce or other leafy veggies since I left Rome so I'm really missing them. Especially living in such a hot climate, it seems almost perverse that the one thing your craving (a light salad with raw tomatoes and cucumbers etc) is the thing that will probably make you the most ill. So I've abstained while day dreaming about how easy it is to pop to the store, grab a head of lettuce and make a salad back home in London.

Our second course consisted of chicken breast rolled around Gorgonzola cheese and plated with a truffle cream. When chef Dev was describing the dish, I couldn't have been more excited since Gorgonzola and truffles are probably two of my biggest trigger words. When I see either of them on menus, I'm probably going to end up ordering those dishes. This led to a discussion with Nipsi about trigger words and how, despite having very different backgrounds, we share a lot of the same ones: pastry, prosciutto, goat's cheese, sun dried tomatoes, Gorgonzola, chestnuts and pie. I know, some of those probably sound a bit weird, like pie, but I love savory pies back in London. I guess these are the ingredients that I feel are too decadent, either in calories or price, to buy often. Anyway, this dish was absolutely amazing. I think it takes a very steady hand to keep the Gorgonzola from overwhelming everything else on the dish and chef Dev did a great job of letting the truffle have an actual presence in the sauce. Really well balanced and probably my favourite dish of the day. 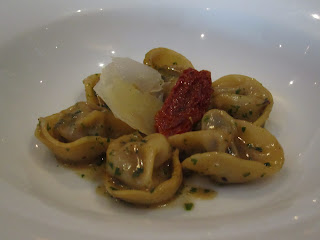 Next up was tortellini made with confit of duck in a chicken jus. The dish was surprisingly light and I thought the duck had nice flavour. The only issue we had was that the duck wasn't as tender as we had expected but I actually thought that added a nice bite to what could otherwise be a bit of a soggy dish. Overall, I would definitely order this again. I thought the chef did a great job of keeping our portion sizes small but we were still rapidly "getting stuffed" so I guess the promotion's title was pretty apt.

The fourth course was mezzaluna pasta filled with cannellini beans and sage served with rustic tomato, basil and garlic sauce. "Mezzaluna" means half moon in Italian and is named for the pasta's half circle shape. I've never had beans in pasta before so I was a bit confused about whether it would work. However, cannelloni beans sauteed with sage and olive oil is a very common dish in many areas of Italy and one I had enjoyed before so I was willing to give this dish the benefit of the doubt. Lucky I did since it was delicious! Chef Dev explained that this is one of his signature dishes and I could see why. The beans were kept just slightly al dente before being added to the pasta which allowed them to be fully cooked but still retaining a bit of texture that helped to give the pasta a solid bite rather than being too bland. The sauce was also tasty in its simplicity as it let the focus remain on the pasta.

Following the mezzaluna pasta was a course of spinach and mozzarella cannelloni with a white sauce topped with more cheese and a simple tomato base. We were so full by this point and uncertain of how many more courses lay ahead so we only managed to eat half of our servings. These restaurants are always so kind to give us each a proper plate of each item but I was definitely contemplating the merits of us sharing one plate by this point. However, it was really nice, although I did feel it might have needed a bit more salt since the cheese didn't have as noticeable a flavour as I had expected. Overall though the dish was surprisingly light, which we appreciated as we moved on to our sixth course.

Our final course before dessert was made up of stewed vegetables wrapped in a filo (also written as phyllo or fillo) dough parcel and served on a bed of asparagus and tomato sauce. While I was slightly tired of the tomato sauce by this point, the asparagus was really delicious. It had been dressed simply in a bit of butter and herbs and was easily the star of this dish. The filo dough was slightly undercooked in the middle so I focused on the ends of the parcel. I almost thought that the tomato sauce was unnecessary since the vegetables had been stewed in a similar sauce and therefore the taste was pretty strong. I think if I hadn't been so full from the previous dishes, I might have enjoyed this one more as it has another of my trigger words: pastry (and yes, I consider filo dough to be pastry!).

Our first of two desserts was a warm pear and walnut strudel, served with chocolate dipped walnuts. I've never had pear strudel before but I definitely will again. This was amazing! It was surprisingly light (although the picture might indicate otherwise) and had a very light cinnamon taste. If I hadn't been so stuffed already, it might have been nice to have some ice cream on the side or something but as it was, I was very glad it came on its own!

Finally we reached the end of the meal in the form of orange, chocolate and cointreau crepes. The filling was made up of those ingredients, which had been sauteed until the orange segments essentially melted into the sauce. It was delicious! And, as an added treat, it was garnished with candied orange peel. Overall the lunch was such a special treat and so amazingly filling that we both came home and fell immediately into food comas. However, I did start to feel nostalgic for Roma! Only five weeks left here in India before I'll be back in the land of pasta and prosciutto... can't wait!